Mick Boogie brings it back again with another mixtape; this time – like everytime – he enlists on the freshest of old and new talent for his Changemakers Mixtape. 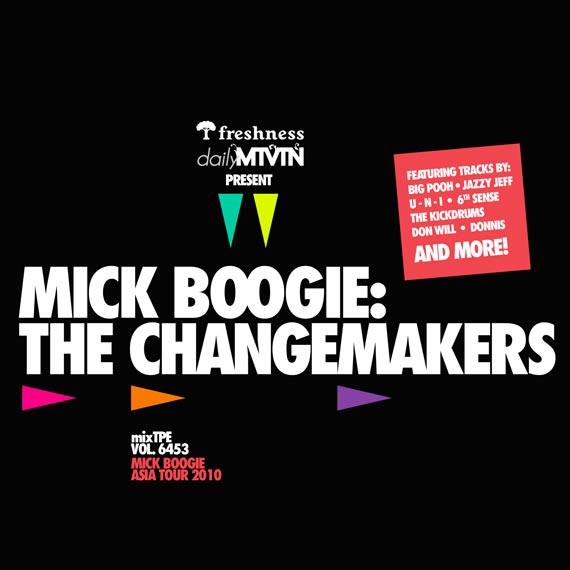 It’s no secret that “hip-hop” is now a nebulous term, as subgenres like Hyphy, Crunk, Grime, Jerk, and Club all have a specific sound while still falling under the banner of rap or hip-hop. Even “indie” or “underground” designations assigned to certain artists and tracks seem to be uniform and generic. But artists like Pooh of Little Brother, Curtains, Skyzoo, Christian Rich, and U-N-I, all of whom are featured on the “Changemakers” tape, are examples of artists who don’t fit neatly into any one of those boxes.

This mixtape adds to Mick Boogie’s already-impressive resume of compilations that represent today’s mottled musical landscape, including artists as varied as Kidz in the Hall, Chip tha Rippa, Peter Bjorn, and John, the Noisettes (mixed with Kanye West acapellas), N.E.R.D., and many more. As Mick Boogie continues to make lasting impressions both at celebrity events like the MTV Music Awards or the Tribeca Film Festival and on mixtapes that introduce listeners to new sounds, it’s clear that the role of our best DJs remains the same. While many club DJs nowadays may be asked to play a repetitive mix of familiar tunes or mixes, the mixtape DJ is free to compile songs that can inspire and impress the listener while making the hip-hop world take notice, and in some cases, “change.”

Thanks to The Freshness for the drop.

Watch this space: In the midst of a monumentally blazing Summer, Mick Boogie stays high, dry, fly… just chillin – you’d be wise to sit back, relax to this, and do the same.