It’s Good Friday, so let’s make it great and take it to Follow Friday – today: the freshest of the fourth estate. Follow these tweeps because you, yes you Lost Generation, need a cultural barometer

The pre-eminent music/culture magazine – period. Hailing from across the pond, Q Magazine delivers any and everything any worldly (wannabe or otherwise) Gen-Y audiophile needs, fiends, and desires on print and via twit.

Why follow: I’ve been a Benedict Arnold since 2003, and I really don’t feel badly about it – because Q feeds me more than apple pie ever could. Besides, Rolling Stone’s gathering moss and Spin needs a British twin.

This New York publication is so very urbanite: trendy, hipster-ish (less Vice, more Vogue – read: cool and credible, haute culture without the Vice hangover, but not fully Vogue hoity-toit); offers the best of music, fashion (put it all on me), city life, literacy, and the like.

La Roux album vinyl give-away on the CherrytreeRecords.com/chat in two shakes. Sign in all you homies.

When not serving as your Pop Alternative, they moonlight as your Pandora Alternative… CherryTree Radio is the most deliciously dangerous fruit of Pop’s poisonous tree 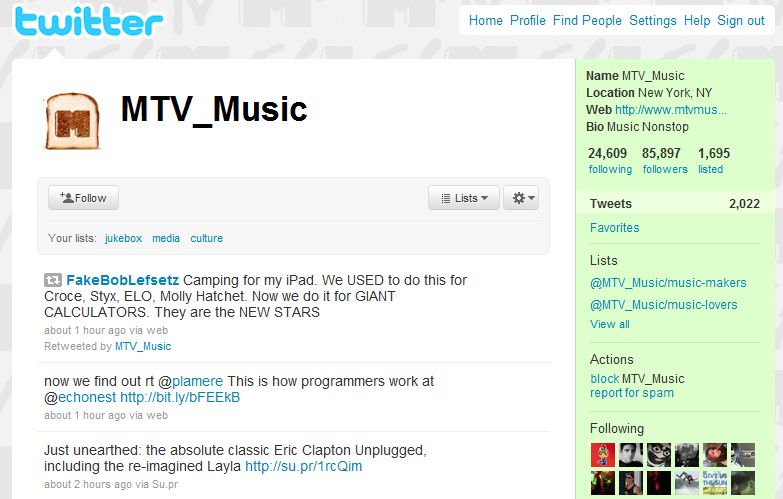 MTV may not play music… or videos (because they never made that promise to you, you just falsely assumed MTV stood for music television, just like you assumed Pluto was a planet – you must get your textbooks from New York because Texas never told you those lies, just these) but they offer a Twitter that does. Progress is a slow process, it doesn’t have to be but it is. That said, I’ve gotta give it to MTV for making a move in the right direction. 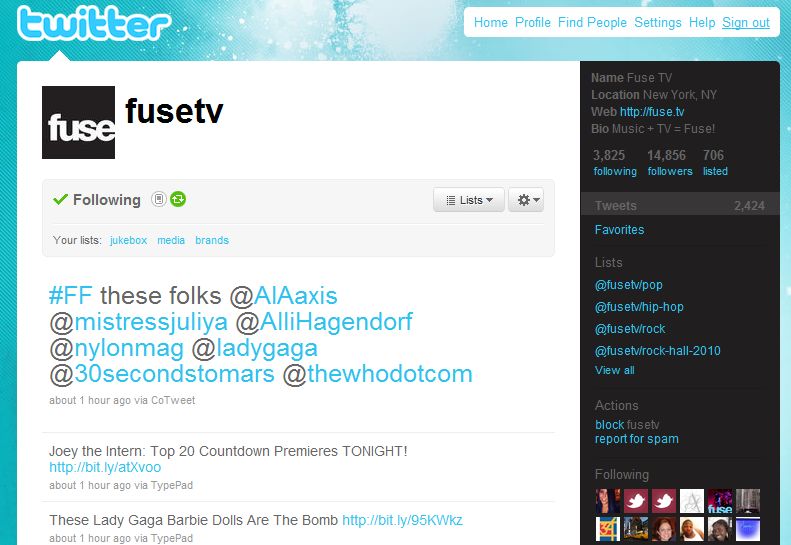 FuseTV how do I love thee, let me count the ways… Just when I thought I had lost music television forever, Fuse came along and was like “Hey there misery, want some company?” I was like “You’re not MTV or VH1, why would I want to watch you?” Then they were like “Because we aren’t MTV or VH1.” That’s when I knew it was love. Fuse is MTV 2.0 (read: better, badder, bolder but in a low-key whispering-because-the-loudest-in-the-room-is-the-dumbest way). At the peak of MTV’s divergence from its core identity of playing music videos, and reflecting the contemporary culture’s creative base (in a commercial way, of course) FuseTV takes the lead. Fuse’s TV lineup is all any musichead needs: Takeovers (because the break’s over), videos, Chronicles, videos, Hip Hop Shop, videos, concerts, videos, Hit Lists, and the return of televised music’s crown jewel: THE COUNTDOWN. FuseTV is Pop actually: not fluff, not bubblegum, but popular music among the young/young adult demographic which means hip-hop, rock, alternative, electronic, “pop,” urban contemporary, etc. FuseTV is MTV at On to the Next One status: approve. Oh yeah, and they tweet.

Why Follow: Music+TV=Fuse: where music lives (and they make for better neighbors than the Real World kids). You think you want MTV, but really you know you need FuseTV.