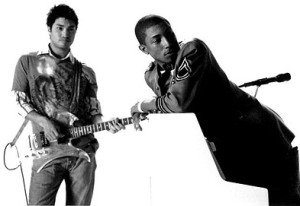 The Imperial Skateboard P and Chad Hugo – better known as The Neptunes – are undoubtedly two of hip-hop’s paramount producers. If Kelis’ milkshake brought the boys to the yard, The Neptunes’ ice creams brought the billionaire boys club to the block with their signature intergalactic sound.

Pharrell paved the way for the futuristic funk stranglehold on the past decade’s mainstream sound. Tag-teaming with Hugo, Williams blended satellite synth and subwoofer shaking bass in a way that created songs that were not mere remixes, but fused genres to remake the entire Top 40. They took pop from bland bubblegum to bombastic boom, and took rap/hip-hop from the cold hard underground and into the blinding light.

Hugo and Williams’ discography jumps off the New Jack Swing kick of the early 90s where they worked with heavyhitters like Mike E, Teddy Riley, Blackstreet, Wreckx N’ Effect, and SWV. Their sound transitioned into the bass-driven vibe of mid-to-late 90s where they set the tone for the urban contemporary landscape, collaborating with rap royalty past and present: Noreaga, Total, Ma$e, The LOX, Puffy, and protege duo Clipse. One of the finest gutterfunk mixes of the era was ODB’s “Got Your Money” featuring The Neptunes first lady, Kelis.

Pharrell’s voice graced tracks like a stratospheric cherry on top of his ice cream sweet lunar beats. East coast, west coast, tomato, tomahto: it’s all hip-hop. Leave it to alien producers to bridge the battleground. With these two space cowboys at the helm, where would Hov and Snoop meet to squash the beef? “In outerspace” – on planet Neptune.

Yeah, I said it. The Neptunes brilliance is highlighted by the shadows that are N.E.R.D.’s own albums. N.E.R.D. has epic singles, but albums that find themselves stagnant in the experimental place. That would work for most artists, but most artists aren’t Pharrell, Chad, and Shay. That said, this remix has The Neptunes topping an N.E.R.D. track that was already great – so if remixes were the cereal kingdom, this one would be Tony the Tiger: grrreat. Production notwithstanding, Everyone Nose (Remix) touts the lyrical kingpin trio that is CRS – Pharrell, Kanye, and Lupe – with the literal kingpin, Pusha T cutting killer lines worth more than a white brick’s weight in gold.

Real talk: one thing is for sure, if The Neptunes remix a record – we’re all star trak riding it.