This is the drop after the first waves and floods: GaGa. Klein. Alejandro. I’m not here to talk about her facial features, or how to convert atheists into believers; I’m just saying that somewhere in the midst of a socio-political indie short film, and a scene-by-scene homage to immaculate conceptions – and collections – lies a near perfect Pop music video – period. Is pastiche supposed to be coherent? It is now – let’s delve.

Visually, this is a Pop video. It is fluid, it is atmospheric, it is conceptual, it’s relevant, it’s universal. It is literally a motion masterpiece. GaGa never stops, never smiles, never breaks character; that is where “Telephone” faltered – it couldn’t be taken fully seriously when its uber-kitsch bordered on the satirical. Here her intensity is constant – she’s as serious as the heart attack that is a possible side effect of viewing such a piece. At the most basic level, this video gets it in. If you can’t read between the lines, this video is for you; if you can’t read, this video is for you; if you like pretty pictures, this video is for you; if your top eco-friendly habit is recycling cereal bowls for haircuts, this video is for you. “Alejandro” is universal appeal; why is it nine minutes long: because that way, there is bound to be something for everyone. To elucidate on the sheer cinematic mastery that is Alejandro’s sonic aesthetic would be to diminish the authenticity of visual expression through semantic explanation. Let it be said though, that GaGa and her boys dans life like a LoveGame, and can werq a runway  two snaps and a circle around.

“Alejandro” as a video in the midst of Pop history is a fine respect to royalty – namely, Madonna. What the preview did to “Vogue“, was what the video in its entirety did to her Madgesty. Call it what you want – an ode, an homage, an ether, a poor execution – but call it. Some channel Madonna, but until now we have never seen a challenge. When Britney and Christina looked to inherit the throne, they dressed up in Madonna’s love and awaited her formal blessing. GaGa isn’t looking to inherit a throne, so much as she is actively acquiring and building a kingdom; she isn’t looking to be Madonna, so she isn’t looking to Madonna – or her kiss – she’s thinking “how would Madonna do what I’m doing now?” She looks to the one who built Madonna’s most comprehensive reinvention to direct her own, and she finds the man behind the epic Re-Invention World Tour’s aesthetic: she finds Steven Klein. Take a Pop artist with infinite resources – an endless well of Pop knowledge, a vast expanse of socio-historical references, an increasingly limitless scope of reality – pair her with a photographer who breathed life into Madonna’s live renaissance and you get GaGaKlein – if Pop was Power Rangers, GaGaKlein is Ultrazord … times three. The product is an homage to the Queen, from a successor – not a subject. That’s not the point though, the point is to make a point, and on the Madonna tip – this isn’t even the iceberg. GaGa is at a ReInvention state of mind, in the body of Blond Ambition. Welcome to Pop 2.0: cone bra upgrade, militaristic fashion show upgrade, quick-cut-to-concept Pop mélange upgrade, Frida homage upgrade. No, GaGa wouldn’t be where she is without Madonna’s path, but at some point we need perspective on the past: there are those who did it first, and those who do it best – statement of fact. Here, GaGa dresses for the job she wants, not the one she has: she took off the product placement and put on a pair of black slacks – because now she wears the pants in the family. 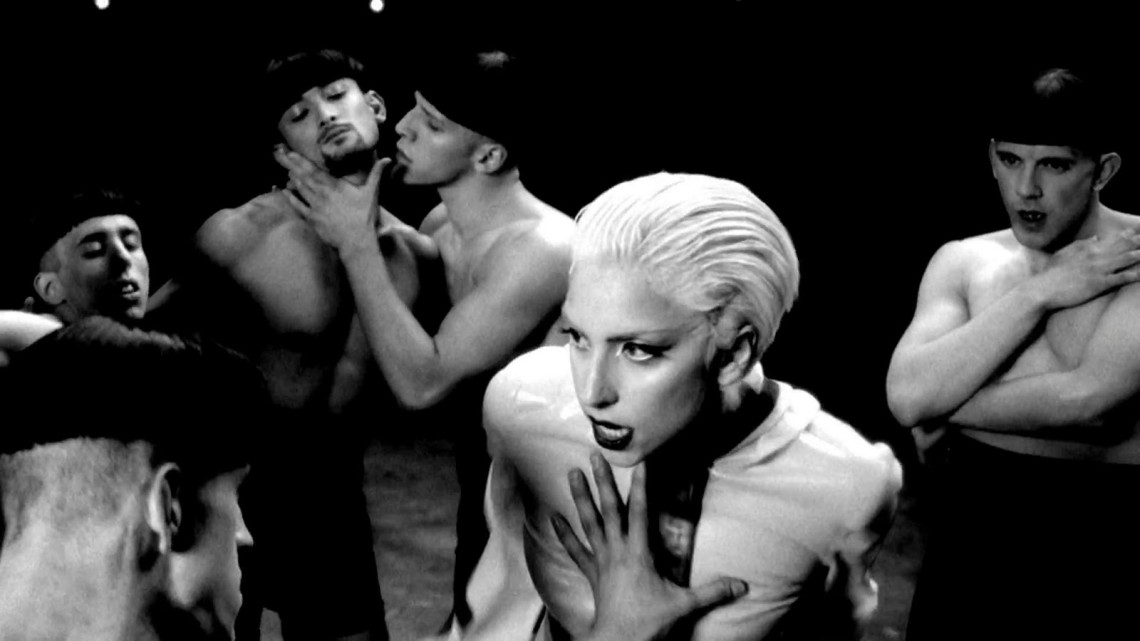 The opposite side of the spectrum is what “Alejandro” means for GaGa in and of her former-Haus-now-Kingdom. She said The Fame Monster was her Blueprint 2: The Gift and The Curse. “Alejandro” is her Blueprint the Third… right down to the Reich. The video is visually stunning, it is a dazzling piece of work – and a beautiful fusion. She combines the classic cinematographic aesthetic quality and abstract social theory of “Bad Romance,” with the length and structure of “Telephone.” The atmosphere is the concept. “Alejandro,” at nine minutes, drags on for a music video; but in GaGa’s self-contextualized world where Pop Music Will Never Be Low Brow, it is exactly the length it needs to be for a film that is far more than the modern standard for a “video.” The production is so precise and well-crafted that each individual scene is a story in and of itself. It’s broadcast theatre. This is GaGa the jester giving her monsters a history to record.

Globally, this is the post-apocalypse. “Bad Romance” was the apocalypse. We saw the fall of the pristine white underground haven, the beautiful “Bath Haus.” The figurative patriarchy – objectifying and devaluing women – diminished to mere ashes beneath the literal skeleton of GaGa’s former owner. GaGa laying beside his corpse, unaffected with a lit cigarette hanging from her lips, as the vixen and the victor – the Kingdom now belonging to the she. Fast forward through “Telephone” – the “en route” between point A and point B (points BR and A rather). We arrive at her post-apocalyptic military nation. This is the pendulum swing of power. GaGa presides over a post-war wasteland. It is the polar opposite to the Bath Haus: desolate, obsolete not opulent, above ground, but far from the light, a place founded on survival over splendor. Here the social script is flipped: GaGa assumes a familiar position, embodying and emulating the stance of her former superiors, watching and analyzing her male objects below as the Russian Mob did before. She emulates their behaviors, but more so embodies their role – every David becomes a Goliath, and vice versa. She may have overtaken the former powers-that-be, but in her ascent she didn’t take down the institution, she merely assumed their position. As an iconography, she represents every revolutionary who killed the cause in light of the crown. She is the monarchy, she is the military, and she is the Church. This barren wasteland is no more of a utopia than the “Bath Haus.” So, she steps down from the throne and into the throws – literally, they toss her around like a You Doo Doll – where after a cavalcade she becomes the monster martyr.

For those who get caught in concepts, the point – again – is to make a point: globally, this is GaGa saying institutions are based on superiority and submission – whether it’s gender a la “Bad Romance,” or orientation a la “Alejandro” – that inequity is the apocalypse. Her own descent from power here leads to a familiar fate: GaGa on the left side of a bed, beside a male suitor; however now the bed is black, and she – the marionette, the monarch, the martyr – is laid to rest, while the male prevails. But wait – there’s more! What about the monsters? For them this is not a play, this is a promise. GaGa’s world is an alternate universe: as much as the institutions within the system hold the fringe elements subjected, the individual at the helm can be their salvation. In a real world where the freaks are disposable monstrosities, in her ball the monsters master the domain. This is her manifesto. She is legend to her tribe, and this is their Kingdom: she will be their monarch, she will be their general, she will be their matriarch, and she will be their martyr.

Scope out: none of the aforementioned reasons are why I love “Alejandro.” I appreciate this film because of what it is and what it means to GaGa and Pop. This is GaGa writing the Pop renaissance. I have said it before, which is all the more reason why I stress this now: she is so impossibly not finished. “Telephone” was the epitome of hype, it was her response to the bandwagoners, the critics, the skeptics, the monsters even. It was touted as “the moment” that the world hyped as her alpha and omega – and she obliged. “Telephone” was her full-length VMA Paparazzi finale: it was her killing herself on film so you would stop waiting for her demise. “Telephone” was Americana Pop to a fever pitch: product placement, bright lights and colors, death, buzz, hype, consumption, celebrity, garage, glamorous, ambiguity, ADHD-appeasing quick cuts ad nauseum – it was a cliché for a cause, but a cliché nonetheless. She exaggerated the expectations – if only to check it off the list. Post-“Telephone” comes the backlash. When you lower yourself to others’ expectations, you are left at the whim of their inevitable condemnation. So it was, and while the world focused on the artifice – the “exhaustion,” the “so bold, she’s boring,” the fad fatigue, the 14:59 syndrome – GaGa was cultivating her art in the cut. So, we slept on her; “Telephone” is her letting us know what happens when we seek, Alejandro is her letting the world know what she does while we sleep – difficult takes a day, impossible takes a week.

In a fitting pretense to the release, GaGa said at her SHOWStudio interview

“It’s been my experience in the industry that I have connected on a much deeper level with the most iconic and legendary people that I have admired. I have not connected with any of my contemporaries. That has freed me. I used to be guarded in interviews, I’d sit there with glasses on and barely speak. I almost developed an accent at one point, I was so guarded and nervous. The media was trying to destroy me. I let it go much more when I got to meet the people I worshiped as a child. It has influenced me most in the past six months, maybe a bit longer: everything happened very quickly for me. Meeting these people I’d give my right arm to have been around and learned from: I’ve discovered myself again. I’ve discovered my freedom, my security – myself. It makes me smile just talking about it.”

Nutshell: “I can’t connect with my contemporaries, in connecting with legends I’ve discovered myself;” read: “I discovered I am legend.” The subtle self-awareness is so strong here. In a whisper, she puts the “Lady GaGa” character to rest. Everyone hits this point, Madonna hit it around Evita (of which there were a number of nods in Alejandro), Britney bathed in the blackout, baptized in blacklight, Justin nor Christina ever really hit it, Bowie killed Ziggy, etc. GaGa is hitting this less than two years after her debut release. All this is to say that “Alejandro” is her sea change – thus far.

GaGa didn’t ask the world to like her, she told them to – and we obliged, flaws and all. While, one one hand, she is officially having the most fun not playing games with the industry right now, she is also on a clear mission. “Alejandro” will stand as the point at which the skeptics were warned for the last time: in the face of early fame and its barrage, this icon was not broken, she was just a baby – but a child no more.