This year we were granted a front row ticket and a backstage pass to the greatest show on Earth: this year, we lived Fame Kills – proof that the revolution will not be televised, it will be realized; Kanye West and Lady Gaga are a revolutionary renaissance for a rebellious renaissance-era. Follow me down the Pop path, a Monster’s memory lane where the Glitter Way meets Elm St… where Fame Kills was not a concert, but rather an immaculate conception:

Humbling the most famous man on Earth

and hailing in a new reigning deity

We watched her grab The Glory – not step-by-step, but leap-by-bound – battling bad romances, cutting the cord, killing the hypercelebrity culture, shutting the doors on the beautiful people, exalting the freaks, warring demons and death in all its forms, while still creating and finding the art in it all, defying the space-time continuum and 15-minute lifespan: deifying herself to the top of Pop’s pantheon (because you couldn’t ether Madonna… could you?)

Despite all of their stellar achievements in the music business, it seems the one thing both Lady Gaga and Kanye West most desire is in fact a chance to work in the fashion industry. Together, they may have sold over 50 million records but as far as their ambitions go, the sky is the limit and there just is no holding these two back, even if it means venturing off into uncharted territory.

And so we thought about Kanye every now and then, as he went home again – starting from scratch, finding solace in his comfort zone, recharging and re-energizing for the rebirth: from fashion internships in Rome and Tokyo, to studio sessions in Hawaii, he stabilized his personal life, and became the Louis Vuitton Don of domesticity… crafting a home in strides towards a cultural castle. 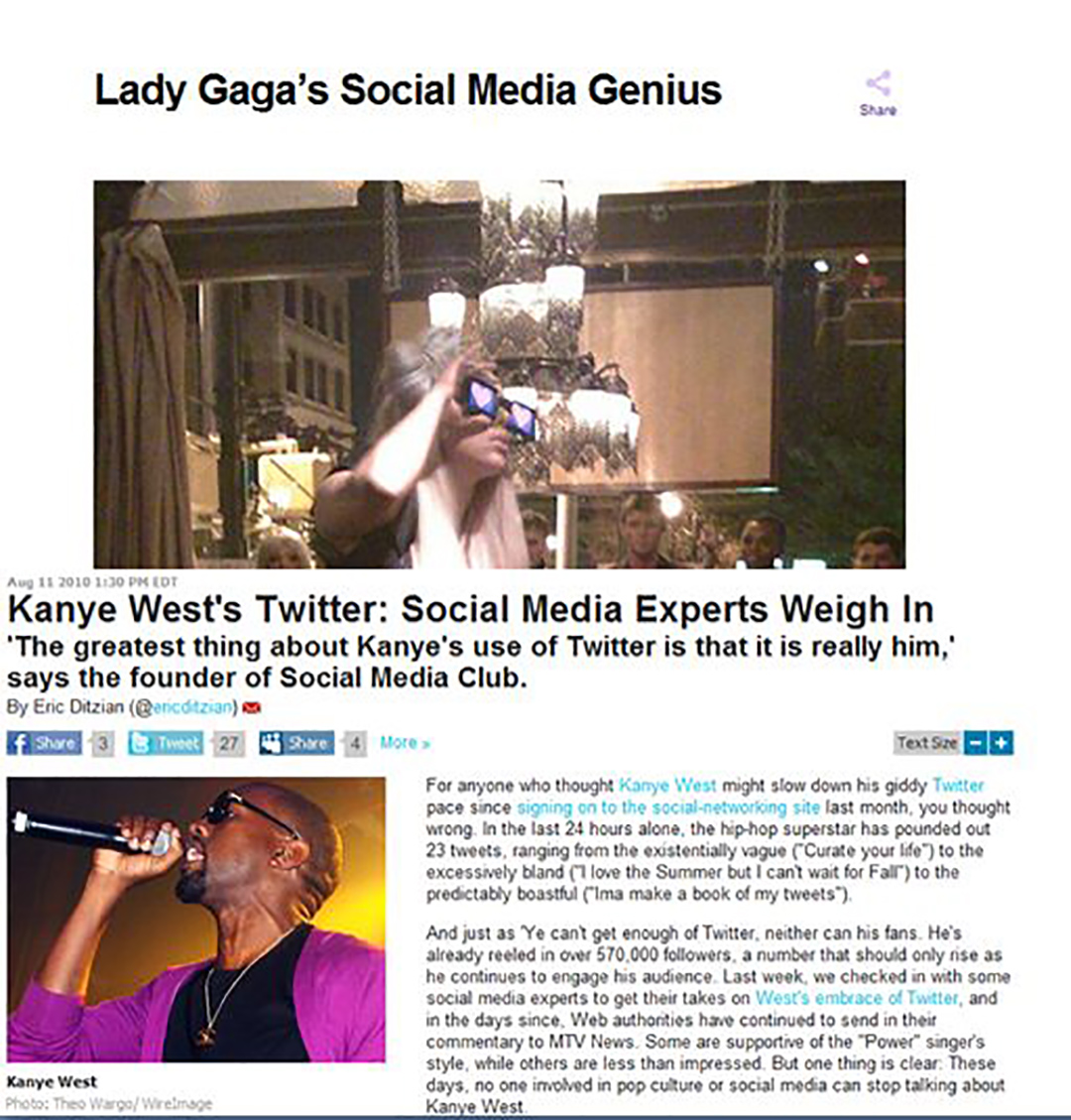 Social media – oh right, because while you were sleeping: they kind of took that over too… she kind of mustered up a monster army becoming the first person to hit 1 billion YouTube views, 10 million Facebook fans, and 6 million Twitter followers… while he kind of held court at Facebook and Twitter headquarters – and took over the Twittasphere one tweet at a time #ohhainewmonarchy

Here we are now, leaning on the Fall, back on the brink of Pop’s crystal ball – the VMAs – looking back, looking ahead, looking down, and looking point-blank in the face of the Post-Apocalypse – where The Fame killed fame …

#mytwocents: Art Lives; Fame Kills; Revolution Resurrects – get it how you live it #pawsupforpower