Dubbed “Spooky Adu” by Steve Albini (Nirvana, Joanna Newsom, PJ Harvey producer) who recorded her solo album, Dark Joan, “Leila Adu takes you on an aural journey that most progressive rock albums could only attempt.” Raised in New Zealand of Ghanaian descent, Adu has produced three acclaimed albums, written for and sung with the New Zealand Symphony Orchestra, toured extensively and had radio play in the UK, mainland Europe, the US, Australasia, Russia and the Far East. 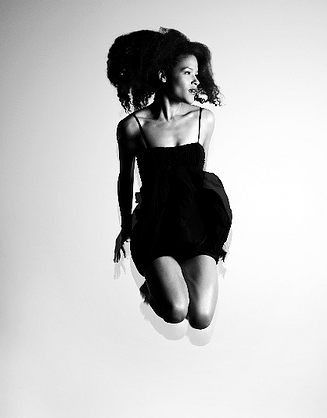 Leila Adu has a distinct sound, one that in its antiquity finds a fresh niche space among the mainstream current. Adu’s music reflects her own rich and diverse identity, blending indigenous sounds from the South Pacific and Ghana with tangibly fantastical instrumentation – a sonic funhouse of second glances and expanded perceptions. There’s a strong sense of Steampunk flowing through Adu’s Cherry Pie in the Factory Worker’s honorable eye – ear rather – demeanor, as otherworldly themes coalesce with Victorian-tinged melodies. So below: take a listen at the old, the featured, and the new of the one Miss Leila Adu…

BlinkkIt: Funeral organs herald in the the ambiance of a funhouse carnival, as Adu croons over off-kilter piano scaled staccato… rhythmically detached percussion sets a subtle manic procession… “You make me feel like a spinster in a tower,” lyrically navigates the listener through amber waves of antiquated instrumentation… Rapunzel weaves through the song, from the tangibly tangled melody, and the timbre of amber tresses effortlessly flowing along to the familiar sounds of fairy taled timeless era, and renaissance perceived past…

BlinkkIt: “Martian Raft” sails along like an intergalactic acoustic lullaby. There’s an undeniable extraterrestrial feel as Adu makes the most of the ever-elusive, yet ever-enveloping negative sonic space. The lone keyboard emphasizes Adu’s vocals, echoing the expansive sense of minimalism beneath the deft-yet-dainty keystrokes. Even though the track holds only a keyboard in its instrumental arsenal, the notes play along as if from the indexes of a prodigy – effortlessly masterful, with a unknowingly humble sense of whimsy. Adu’s voice navigates the listener through the narrative, guiding but not imposing direction… still, there remains the innate intangible connection to the song’s simplistically hypnotic human chord progression… childlike in an awestruck way… wonderful.